In his column dated June 11, 2009, David Pogue detailed the pricing of Mac OS X "Snow Leopard" and suggests that Apple may be taking a page from the App Store playbook.
What do you suppose is the difference between the pricing model of the App Store and more traditional pricing models?
I recall reading an interview with an Apple ][ developer from the 1980s. I'm afraid in ten minutes of searching Google I can't find the article anymore.
His company was developing one of the first spell-checkers for the Apple -- it was a revolutionary product at the time. There were other competitors in the market, but his software was faster and fit into less memory: thousands of English words stored in just a few kilobytes. (Back then an Apple computer had only 64K of memory.) His product was also cheaper than the others. They sold very few copies.
So they raised the price of the software and sold more copies! Astonished, they raised the price again -- now more in line with their competitors -- and sold even more!
Price is a reflection of perceived value and quality. With no other quantifiable measures of quality available to consumers (remember, they're just reading ad copy or a box cover), an estimation of a product's value and quality is based on price. All other things being apparently equal, something that costs more than another must be of higher quality.
How does this play out in the App Store, where something that costs less than another sells better?
Posted 6/11/2009 01:37:00 PM 1 comment: 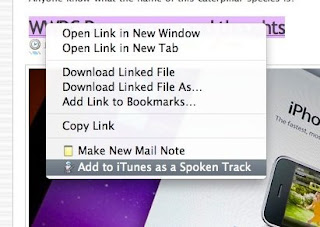 MacRumors today posted a few screenshots of the upcoming Mac OS X Snow Leopard release. One of the features in particular grabbed my attention: automatic text to speech with conversion to an iTunes track.
Whoa! That's a shot across the bow to the Author's Guild which in February tried to seek an injunction against the Amazon Kindle 2 for its text-to-speech feature. Amazon has since bowed to the pressure and has started to disable TTS on some of its offerings.
This Snow Leopard feature creates new content from existing content -- the very thing that the Author's Guild objects to. With this feature you could buy an e-book, convert it to an audio track, and listen to it on your iPod.
I wonder how the quality of Apple's TTS compares to the Kindle's.
Posted 6/11/2009 01:30:00 PM 1 comment: