OK, I'm thiiiis close to getting an Apple iPhone. I'd have to break my contract with Verizon. But there have been so many times that I've been out and about and wanted to quickly look up something on the web. Or check my email to see if I've been outbid in the last 10 seconds on a digital oscilloscope auction, again.

I've used my friends' iPhones and played with them in the store. As a result, I'm tempted to wait until software updates or a new iPhone model comes out. There are some nifty features missing on the current version that it desperately needs to be really, really usable. 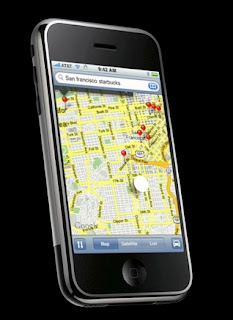 Think about it: how many times have you been in an unfamiliar town (or even a familiar one) and wanted to know something like "where are the Italian restaurants nearest to me right now?" or "where's the nearest Post Office?" With the current iPhone, you can bring up Google Maps, which is great, but you still need to know what city or ZIP code you are in. What if you don't know your exact current location? You're screwed, because either you can't search at all or you get way too many results.

What I'd like to see is a way for the iPhone to know its current location. GPS would be great, as it would give your location to within 10 feet or so, but for Google maps an exact location isn't necessary. Even knowing your approximate current location would be good enough. I don't know much about cell technology, but I imagine that each cell tower knows its own location. The iPhone could do some triangulation to figure out where it is in relation to the towers, at least well enough to make Google maps searching incredibly useful.

Voice Dialing, Done Right
I use voice dialing when I'm driving. With my headset on, I just touch a button on the phone and ask it to dial one of the people in my contact list. Here's how the conversation with my phone usually goes:

Me: Call Brenda
Phone: Did you say, "Call Brenda?"
Me: Yes
Phone: Which number?
Me: Mobile
Phone: Calling...

My phone has a voice-recoginition system that doesn't need training ("voice-independent recognition"). That is, out of the box, it's able to listen to the user's voice and match it with a name in the contact list. But because the voice recognition isn't tuned to a specific voice (mine), it needs to double-check the match. Hence, the question "Did you say...." What gets me is that it is always correct!

Phone manufacturers, unfortunately, have decided that implementing voice-independent recognition is inherently a binay decision (either it's used for all contacts, or it is not used at all) and, if voice-independent recognition is not used, training it is inherently modal. That is, in order to train the phone to recognize names, the user must go into a special "training" mode.

What I want is a phone that learns.

When I answer "yes" to the query "did you say...", the phone should immediately remember what I just said. The next time I ask to call that name, the training will have already been done. That should be the extent of training the recognition system -- totally transparent to the user.

Games
I need my Tetris and Bejeweled!

VOIP
That's Voice Over IP or, in layman's terms, Skype. Not going to happen, though. The purpose of a mobile phone is to make the carrier rich by charging for minutes of airtime.

On the other hand, T-Mobile is rolling out a new service called T-Mobile Hotspot @ Home in which a WiFi-enabled mobile phone can make free call when in the presence of a WiFi hotspot.

You could just unlock it yourself:
http://iphonesimfree.com/

or get really geeky and pull the whole thing apart:
http://www.youtube.com/watch?v=UGYqGooyLlo

or just get a Trio or something and download apps to do all the same stuff.

But I one can "jailbreak" the iPhone, permitting access to Unix below the UI where new apps can be installed.